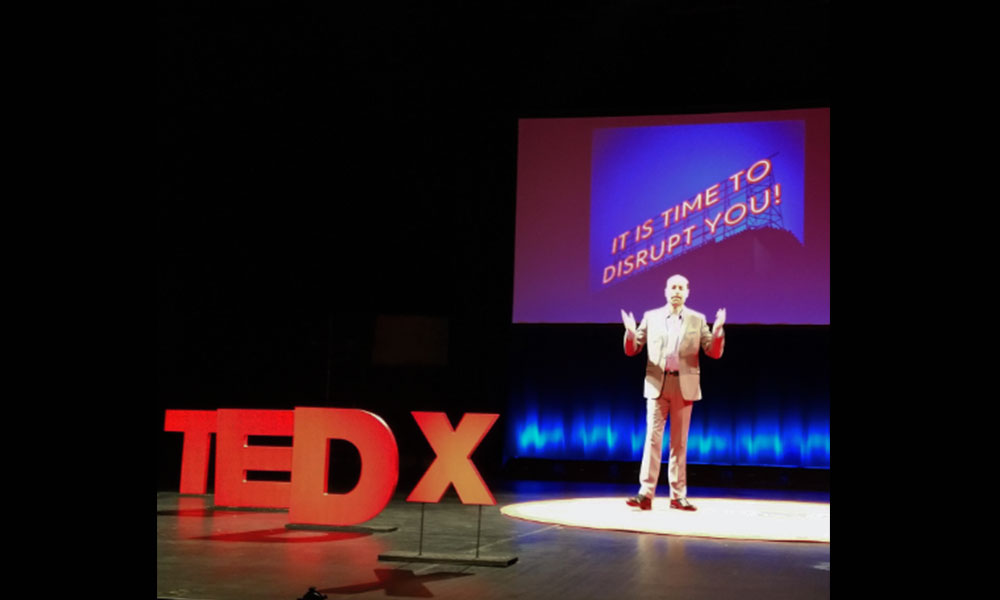 This is an exciting interview for us here at Fair Food Forager. I have read Jay’s book “Disrupt You” a few times now and it really does get me thinking every time.  At his events he tells the audience “Are you living your life, or just paying bills until you die”? That really makes me think, how can each of us positively impact the world while loving what we do?

Jay was at the forefront of putting the internet into US schools with President Clinton, and that process triggered the creation of eBay. He was disrupting business when computers came along, creating the first photo sharing platforms and music video games some 30 years ago. He created an online college social platform before Facebook and a Skype rival called ooVoo. He has helped raise over $800M for startups and add to that his roles at LinkedIn, Sony, EMI and Universal, and Jay Samit is well qualified to share his opinion on almost any topic.

For me it all started after reading “Disrupt You“, I thought I would contact Jay and ask him his thoughts on the Fair Food Forager website. I had nothing to lose, the worst that could happen is he could say no or ignore me. Instead Jay replied and after some back and forth I asked if he would talk to us for our blog. His answer “I’d be happy to”.

Paul – Tell us about you and what you do.

Jay – When the web brought the Internet to the masses in the 1990s, I realized that this could be a medium for change.  The Internet had, for the first time in human history, the ability to bring equal access to knowledge to all mankind.  (Think of how much we take Wikipedia and Google for granted today.) The Supreme Court’s “separate but equal” decision in Brown vs. The Board of Education literally meant that minority and under-privileged children would be given an inferior education.  I wanted to see that changed.  Not as an activist, but as a father and a publisher of educational software.  We had to find a way.

I started speaking and writing on the topic until one day, I got a call from the President of the United States inviting me to the White House to discuss this.  To make a long story short, within 18 months of that call we had wired every classroom in America to the Internet without spending one dollar of taxpayer money.  That is the power of big ideas and one of the reasons I wrote Disrupt You!.  If I can help enact change, anyone can.

Paul – What are you most passionate about? Is there a particular cause that you really support?

Jay – Today we face a bigger challenge than just education.  As we automate the workforce, deploy self-driving vehicles, and industrialize 3D printing, hundreds of millions of jobs are being eliminated.  At the same time, we have 2.3 billion millennials entering the workforce globally – that is more people than were on the entire planet when my parents were born!  There will not be corporate or factory jobs for 2.3 billion people.  When we look at the issues of the Spanish or Greek economies, America’s deteriorating inner cities, and even ISIS, these are not issues of race, culture or religion, but rather massive unemployment for those under 30.  I believe we need to teach people how to create their own opportunities and launch their own businesses.  Otherwise we will continue to see more instability in our world.

Paul –  Was there a defining moment or event that triggered your passion or was it a gradual progression?

Jay – I have spent my entire career working with people that change the future.  Over time as you watch dozens of people become billionaires you realize that the world has changed.  We are all interconnected like never before.  Our phones make us just one click away from 6 billion people.  Utilizing that power isn’t something that is controlled by the elite.  So I began teaching students how to tap into this approach to change.  When you watch two students gross $150 million their first year in business it inspires you to teach the world.  Disrupt You! is now in six languages and growing into a movement of empowering people to master personal transformation, seize opportunity and thrive in this era of endless innovation.

Paul – Many people reading this are particularly passionate about our environment. It’s such a  big topic that it can feel overwhelming sometimes. What piece of advice would you offer someone who wants to make a difference?

Jay – Everyone wants to change the world, but no one thinks of changing himself.  Start by living a carbon neutral life.  We all experience cognitive dissonance when we see hundreds of people take their private jets to Davos to discuss climate change.  Reduce, reuse and recycle are pretty simple guidelines to start with.  There are charities that will plant trees for every mile you fly.  There is no obstacle so great that a determined individual can’t make a difference.  Start local and grow from there.

Paul –  Love it! What is your picture of the future?

Jay – The era of our dependence on fossil fuels is coming to an end.  We have spent a century polluting our environment while solely focusing on growth at any cost. Disruptive technologies will remove most commercial buildings from the electrical grid over the next decade. Solar glass and solar paint, combined with LED lighting and IOT HVAC* systems could reduce energy consumption by as much as 40%.  It is an amazing time to be a disruptive entrepreneur.  So much new technology can be applied to so many environmental issues.

*(Internet of Things is changing every aspect of HVAC – Heating Ventilation and Air Conditioning).

Paul – Here at FFF we are passionate about helping people make the right food choices, the ones that don’t harm our planet. How important do you think those food choices are for our global future?

Jay – Sustainability will soon no longer be a choice, but a necessity.  The planet probably can’t support another doubling of the population and the rate of conspicuous consumption we enjoy in the West.  As I say in Disrupt You! you either disrupt yourself, or someone else will do it for you.  Wouldn’t you rather play a role in how you would like our world to develop?

Paul –  Well said. If you had just a one sentence / message to play on television, radio or billboards to motivate people to make positive change, what would that be?

Jay – The purpose of life is to live a life of purpose. You can’t live forever but you can create a life.

Paul – Music, Art, Travel, Sport etc, is there anything you love doing that makes you happy besides your passion?

Jay – Since I was 4 years old I have been obsessed with magic.  For the past quarter century I have been a performing member of the Magic Castle in Hollywood.  Of all the performance art forms, magic is the one that gets audiences to suspend their disbelief and cynicism; if just for a moment it opens minds to wonder and transcend their reality.  A great magician takes you from “impossible” to “I’m possible.”

This blog originally appeared on Fair Food Forager on March 3, 2016