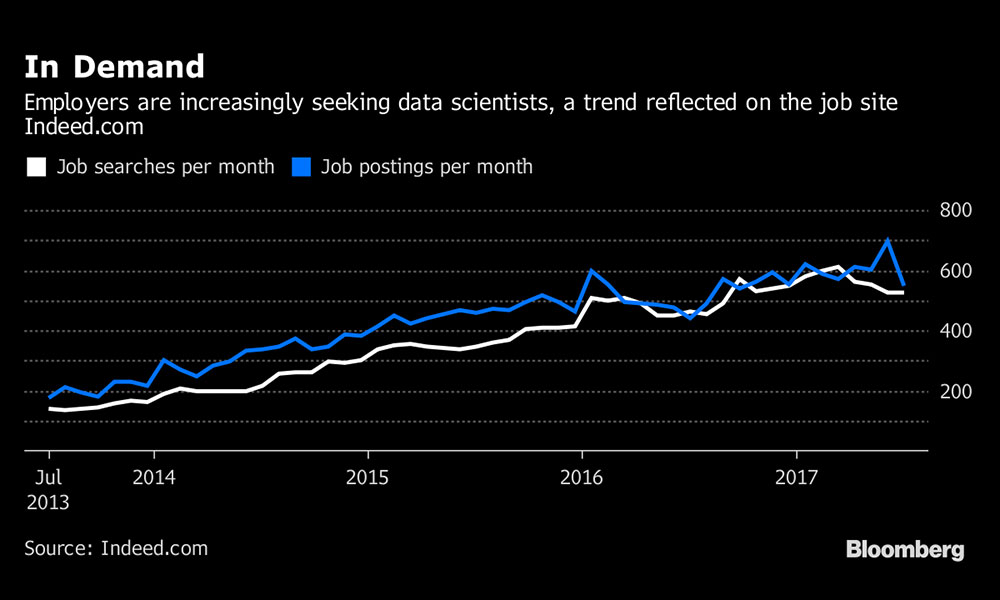 Despite an onslaught of bankruptcies, store closures and layoffs, there’s one retail job that’s still in hot demand: data scientists.

The battle against e-commerce is putting new pressure on brick-and-mortar retailers to fix up stores and deliver a more pleasant experience for shoppers. And that means studying data — lots and lots of data. Department-store chains and other businesses have tons of information that they could use to refine their customer service and get more revenue from shoppers; they just need someone to help them go through it.

“Every company collects mountains of data: some valuable, most not,” said Jay Samit, a vice chairman at technology consulting firm Deloitte Digital. “It’s the data scientist’s job to distinguish between the two.”

Data scientists aren’t just in hot demand in the retail industry. Job postings and job searches for the role have reached an all-time high, according to the website Indeed. Harvard Business Review has called the field “the sexiest job of the 21st century,” and employers across industries and government agencies have scrambled to add such workers to their ranks.

Part of the appeal: When companies dig into data, they can use artificial intelligence and so-called machine learning to help do some of the lifting.

These jobs often require a hefty resume: a doctorate in data science, knowledge of the Python language and strong interpersonal skills. DJ Patil, the first U.S. chief data scientist, is credited with helping coin the term while working at LinkedIn Corp. Patil says that using data to fix problems is something that hasn’t come naturally to all businesses, but it’s key to the strategy of most successful companies in the past decade.

“Retail didn’t think machine learning and artificial intelligence was a big deal until Amazon started crushing them,” he said in an interview. “That’s something that’s super obvious to data people, but not to the business people.”

Now businesses are starting to shift, and that includes retailers. There’s still plenty of opportunity to improve brick-and-mortar shopping. Even with the rise of Amazon.com Inc., U.S. consumers still make about 85 percent of their purchases at physical stores.

But competition is tougher than ever, and consumers often need a bit of a nudge to make a purchasing decision. That’s where the data comes in.

In 2014, Wal-Mart Stores Inc. studied weather patterns and found that people were more likely to buy berries when it was lightly windy and below 80 degrees outside. By narrowing down this trend down to ZIP codes, stores were able to rearrange displays and increase local digital ads to maximize sales.

The effort increased berry sales by over 300 percent, according to Steve Brown, a former Intel Corp. executive who now serves as a technology consultant.

Retailers have traditionally made their decisions based on the gut sense or experience of their managers. That’s guided where to place items in store aisles and how much to price products.

But data helps assure you don’t make a mistake, Samit said. And that can be the difference between having a business that’s thriving and one that’s failing.

“Data is your friend,” he said. “Data has no ego. Data will never steer you wrong.”

Most retailers don’t have access to the breadth of information available to a Wal-Mart. And the woes of department-store chains may be hard to solve with better insights alone. Sluggish mall traffic and deep discounting have roiled the industry. What’s more, many shoppers would simply prefer to spend their money on travel or technology.

But job postings from Macy’s Inc., Nordstrom Inc. and VF Corp. suggest that retailers are serious about using data science to improve their results.

Macy’s, the largest department-store company, has been especially vocal about expanding its data team. Chief Strategy Innovation Officer Justin MacFarlane explained the push to investors at a meeting in June.

“Five years ago, if you were to say there was a team of Ph.D. data scientists at Macy’s that are thinking about our most strategic problems, people would have thought you are crazy,” he said.

But the team has come together “very, very quickly,” MacFarlane said. “And the real power of data and data analytics is focusing those resources and that talent on the core business.”

It’s not always easy for retailers to get data scientists on board. With companies in many industries seeking out the workers, the best employees often would prefer to work at a tech company or a Wall Street firm.

Data scientists might be put off by a sense that retail is dying, said Paul Chatlos, a data-science recruiter for Smith Hanley Associates.

“It’s not sexy,” he said. “Everyone wants to work for tech, e-commerce and online.”

This post was originally published by Bloomberg on August 21, 2017.