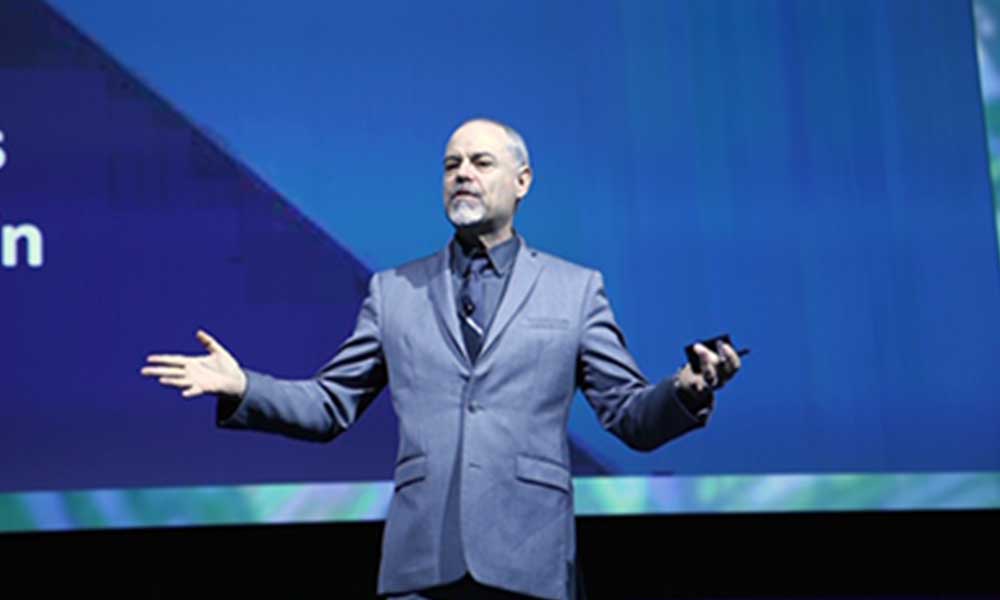 Keynote speaker Jay Samit kept the energy flowing later on Thursday during general session of REACH 2018 in Hollywood, CA. “Disruption isn’t about what happens to you—it’s about how you respond to what happens to you,” he said. “So how do you become a disruptor?”

During the California and Nevada Credit Union Leagues’ annual convention, he talked about how disruptors view the world. Three “exponentials” will change credit unions: crypto-currency, augmented reality, and “the electric drill.” Jobs aren’t going away with disruptive technological transformation. Certain jobs will, but many new ones will be created.

“Our economy has become an economy of ones and zeros,” Samit said. “That’s the catalyst for change for exponential growth. Companies that are changing the world are moving data. Those that have competitive advantages are those taking the data the fastest, studying it, and using it.”

All of these major changes are impacting credit unions and their members, especially manufacturing automation, self-driving vehicles, 3-D printing, bio-technology, artificial intelligence, and more. “Every new technology is inventing new solutions to make our lives simpler and easier. If you’re not a data-centric company, you will not survive.”

When it comes to banking, massive consolidation in the industry has already been happening. The role of the human and “the bank” will also change. People will become “human ATMs,” sending currency phone to phone. The era of the credit card is disappearing—and with it some fraud, perhaps. However, what happens to credit union when Amazon and Apple launch their own currency? “You are going to see more and more countries skipping using the U.S. dollar as the backbone of their economy and using a more stabile crypto-currency instead,” he said.

There’s also opportunity growth with the “unbanked” population of the nation. They are paying a disproportionate amount of their salaries on pay-day loans and other services or loans. “Bitcoinization”—which is using blockchain technology (an ongoing financial ledger stored on thousands of computers)—may solve issues like this, and others. You can use special-use (sometimes one-time) currencies at the micro level between banks, companies or people to solve problems across the world.

“Credit unions are going to have to use the one advantage they have in this increasingly digital world, and that is trust,” he said. “You’re going to want to figure out how to make your money not off of your user, but off of data instead. And they will also need to anticipate their customer’s needs way in advance.”

Samit is a “serial disruptor,” author, and independent vice chairman of Digital Reality for Deloitte
International, as well as a dynamic entrepreneur who is widely recognized as one of the world’s leading experts on disruption and innovation. He also shared his experience in being involved with selling companies to Fortune 500 firms, transforming entire industries, revamping government institutions, and helping grow pre-IPO companies (such as LinkedIn), and pioneering breakthrough advancements in mobile video, internet advertising, and e-commerce.