Virtual Food Is Coming to a Menu Near You 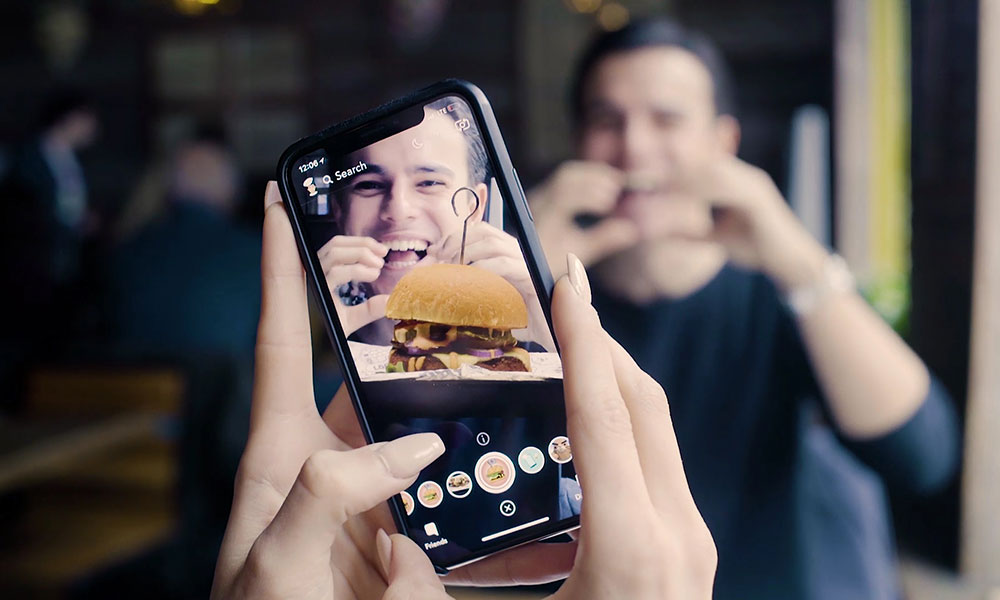 Restaurants wanting to cash in on people increasingly sharing food photos are spicing up their menus with virtual cuisine that patrons can post across social media.

To lift sales, fast food chains are turning to augmented reality to attract a new generation of customers. It’s a 21st century version of Sampuru, the Japanese custom of showcasing plastic food replica in restaurant windows.

Diners simply point their smartphones at a menu or placemat, and sizzling hamburgers and pizza slices dripping with cheese appear on screen that they can then share on Snap or Instagram. Customers who use apps like Google Lens or Apple’s ARkit can even appear to place 3-D virtual meals on their tables.

Restaurants are testing virtual reality as the way to better connect with potential consumers through social media by giving them something to dish about. And millennials, a prime social media-using demographic that also happens to spend the greatest percentage of their food budget on eating out, are the prime target.

Getting the public to share food images on social media—they post 3.5 million food images daily—drives traffic to restaurant websites and reduces the need for restaurant owners to buy ads in traditional media. With 300 million Snap users and 800 million Instagram users, the potential audience is huge.

Food related hashtags are the third most popular category on Instagram with the basic #food being the most popular descriptor. According to a study in 2016 by catering supply website sousvidetools.com, pizza was the top entrée on the service with 19.7 million images shared, following by sushi (13.4 million) and chicken (11.9 million). The rest of the top 10 included salads (#4), and pasta (#5) along with eggs (#8) and steak (#9).

The focus by restaurants on social media is also a product of consumers’ changing eating habits. Investment bank Piper Jaffray projects that one quarter of all U.S. restaurant sales will shift to digital ordering and delivery over the next five years, a doubling from today’s 1.9 billion orders through mobile apps, text messages, and online.

With over $200 billion at stake, fast food isn’t the only sector going virtual. At its annual I/O developer conference last week, Google showed how its digital assistant, Google Assistant, would be able to make dinner reservations for users by tapping artificial intelligence to call and chat with any restaurant’s human host or hostess. After an unanticipated public backlash of having an AI bot calling humans, Google said that when the feature rolls out the chat bot will identify itself when calling.

Restaurants are also starting to combine augmented reality with artificial intelligence to enhance the experience of dining in restaurants.

Bareburger, a chain with 44 locations, has an augmented reality spokesbear. Launched from a QR code on packaging, customers with the Bareburger Rewards app can earn points and get free food by interacting with it. The bear tells patrons about daily specials, talks about the sourcing of its food, and explains the restaurant’s new environmentally-friendly policies.

Bareburger can then analyze the data from its virtual maître d’s interactions to figure out how much free publicity it received and the impact of the technology on overall sales. Nabeel Alamgir, the chain’s chief marketing officer, says the technology has increased same store sales.

Wagamama, a U.K. ramen chain with 140 locations, had one of the first restaurant AR apps designed to interact with placemats to give customers something to do while waiting for their orders. Diners can do things like watch musicians perform at music festivals and vote for their favorite dishes. With 41% of children using tablets to entertain themselves at restaurants, can virtual crayons be far behind?

Social media is turning every meal into a moveable feast where being a mobile star is more important than a Michelin star to most patrons. Recognizing this trend, the restaurant industry is expanding its technology menu and hoping that artificial intelligence and augmented reality are the ingredients for a savory success.

Jay Samit is a serial entrepreneur and author of the bestselling book “Disrupt You!”  This post was first published in Fortune on May 15, 2018