WHAT’S UNDER YOUR ADVERTISING HOOD? 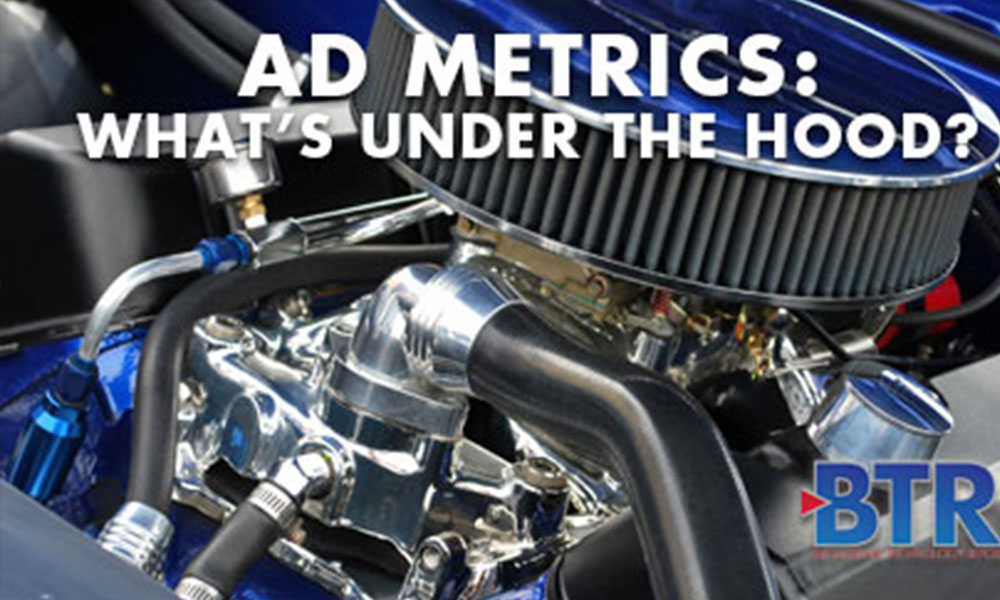 A century ago, Henry Ford measured the performance of his automobile by appropriating the term “horsepower” from 18th century inventors who used it to compare the output of steam engines to the power of draft horses. Barely 50 years later,Nielsen started measuring TV audiences and their response to advertising using a mathematical formula defined as gross ratings points (GRPs).

Today, both are being rendered obsolete by a need for broader and deeper insights.

In the nascent automotive industry, knowing how much power an engine could deliver was once the predominant measurement of a car’s efficacy. Likewise, in the early phase of TV broadcasting, with only three national TV networks to consider, knowing what share of the American audience a given advertising spot reached on a given night was sufficient. Within that context, GRPs helped advertisers understand whether they could reach more viewers buying time on the Ed Sullivan Show or The Brady Bunch.

Today, despite the increasing sophistication of both cars and media, the investment of billions of dollars in these two industries is still predicated upon arcane constructs that no longer measure what’s important.

Evaluating a car solely on the basis of power misses its other salient values (reliability, endurance, air conditioning, comfort, safety, etc.). Similarly, quantifying advertising in GRPs misses the fact that the majority of viewers are not consuming content in a linear universe of pre-programmed options.

Today’s media landscape is increasingly dominated by viewing options that GRPs do not adequately take into account. If a broadcaster has a series with a 1 share, for instance, yet has twice as many viewers watching it on demand, on DVR, or on tablets and mobile devices, that count is neither fair nor accurate. Moreover, since non-linear viewers often make an extra effort to engage directly with the programming, their presence should matter as much as or more than those less invested in the experience.

Going beyond reach and frequency

We need a unit of measurement that goes beyond our current capabilities. Reaching a person who is actively looking to purchase a car in the next 30 days is inherently more valuable to an automaker than connecting with a person of the same demographic who just purchased one. Thus, knowing which is which is an advantage. Moreover, media viewing is becoming more user-initiated, so ad measuring tools need ways to determine intent.

In an age when Google or Facebook can empower advertisers to reach exactly the demographic they desire with hyper-targeting, there is no reason to allocate of billions of ad dollars based on Nielsen’s survey of a few thousand American homes.

Measurement of consumer impressions is not enough. Reaction to what consumers view must also be tallied and analyzed.

That’s where context and sentiment come in. These are becoming metrics of choice as businesses begin to understand that consumer engagement and sharing are measurements that better define the value of a commercial and drive sales than GRPs.

Like Henry Ford’s term, “horsepower,” gross rating points are singular in nature: They measure only one thing. In the arena of cars, it’s speed. In the world of GRPs, it’s exposure. Again, that’s not enough. With cars, there’s more to measure than speed. By the same token, there’s more to media than exposure. To be successful, advertising professionals and the brands they serve must go beyond that to look at the influence exposure has on motivation and behavior.

Monitoring and analysis of direct peer-to-peer social media as well as open communications on blogs, forums, video-sharing sites, and other public forms of social interaction open windows into what consumers are talking about, and more importantly, how they feel about it.

Perhaps the most significant outgrowth of all this is that as content becomes more ubiquitous and more equally distributed across both fixed and mobile devices, the objective shifts from selling something to generating ideas about what the brand means to consumers and the world in which they live.

The ability to communicate at that level, particularly with Millennials, is rapidly evolving from a nice-to-have to a primary requirement. The Share This blog suggests that “brands can crack the code of marketing to this ‘elusive’ generation if they know what they like to share on social media.”

That said, any new measurement methodology needs to be centered around the ability to aggregate and interpret real-time, experientially based data on consumer sentiment and preferences through the full range of social channels. When that is finally within our grasp, the horsepower under everyone’s advertising hood will consist of more than just cubic inches.

Jay Samit is the author of Disrupt You! This column originally was published by Broadband Technology Report on April 10, 2015.