Will AI and the Exponential Technologies Transform Our World in 2019? 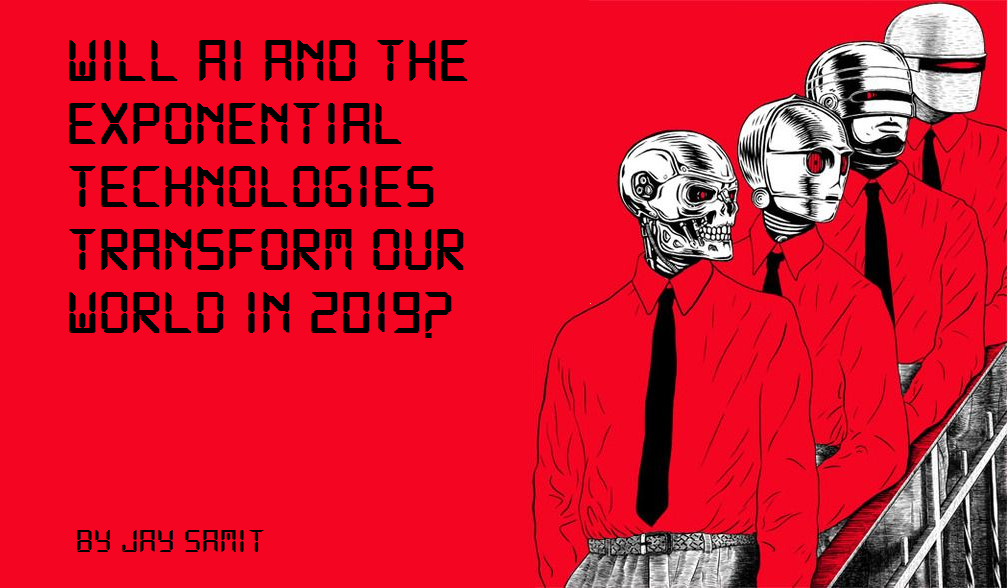 Predicting the future requires a fair amount of hubris, and it should therefore be met with more than an exabyte of skepticism. In past years, I’ve made some calls that have proved prescient; like predicting way back in 2011 that social media would determine the U.S. presidential election.

Meanwhile, some of my prognostications took decades longer than I had foreseen such as my 1992 prediction that this new thing called the Internet would lead Hollywood studios to merge with telecommunications companies. Over the years, I’ve learned that the best way to predict the future is to hang out with the people creating it. And if all else fails, follow the money.

AI is here to stay!

Artificial Intelligence (AI) is expected to grow from a $5 billion market today, to $169 billion by 2025.  But as hyperbolic as that growth rate appears, it only tells a small part of the story.  AI algorithms will power $3.9 trillion in global business value — through better user experiences, new revenue streams, and cost reductions.

AI is fast becoming far more than smart speakers and self-driving cars.  In 2019, AI algorithms will be an integral part of every new exponential technology, from the roll out of 5G mobile networks to maximizing the energy yields from bifacial solar modules at the world’s largest solar park (which opens in Egypt next year).

Worldwide sales of electric vehicles are expected to top 6 million cars in 2019.  With the addition of autonomous trucks and drones, AI will be delivering on the promise of smart cities that our congested urban centers have been requesting for years. Urban planning, architecture, and construction will all benefit from AI.

The impact of AI is so massive, that it is anticipated add $15.7 trillion to the global economy by 2030 and change the balance of financial power between nation states. In 2019, I expect to see China pull ahead in AI as a catalyst for its domestic growth. A PwC reports estimates that China’s heavy investment in AI will translate to a 26% increase in Chinese GDP over the next decade.

Will Robots replace our jobs?

AI will also start to change the composition of the global workforce starting in 2019. Robots, powered by AI, will start by replacing blue collar jobs such as cooks, servers, cleaners, and truck drivers.  As systems grow more proficient, AI will replace medical professionals, contract lawyers, accountants, and salespeople.

Just-in-time manufacturing will be fully integrated into a digital supply chain bringing greater efficiency and cost-costing.  As the billions of Internet of Things sensors get deployed in factories, warehouses, retail and even in homes, AI will access the cloud to anticipate the wants and needs of consumers before the products are even created.

At least in the near term, AI is not a job killer tasked with making workers redundant as science fiction would have us believe.  Over the next 2 years, AI will eliminate 1.8 million jobs that machines can do better, but it will also create 2.3 million new jobs as 5G, cloud computing and wearables conspire to deliver a whole host of new products and services never before possible.

With countries such as the United States facing a shortage of over 100,000 doctors, AI can provide a low-cost solution and an even better level of care for many (For example, when Harvard pathologists used AI to help diagnose breast cancer, their accuracy increased  to 99.5% ).

So many global companies are rolling out bots in 2019, that it is estimated that by 2020, 85% of all customer interactions will not involve a human.

If you think I am overly aggressive in my predictions for 2019, perhaps you’d believe the world’s richest man.

“Machine learning drives our algorithms for demand forecasting, product search ranking, product and deals recommendations, merchandising placements, fraud detection, translations, and much more,” states Amazon CEO Jeff Bezos, adding:  “Though less visible, much of the impact of machine learning will be of this type — quietly but meaningfully improving core operations.”

Today, AI is responsible for 33% of Amazon’s sales and 75% of Netflix views.  With global mobile web traffic exceeding 16 exabytes and global internet traffic growing to 158 exabytes, marrying real-time data analytics to machine learning and AI is the key to survival for corporations.

Amazingly, 90% of the world’s data was created in the past 12 months and less than 1% is being effectively analysed.

In this age of endless innovation, the only competitive advantage a business can have is its ability to gain insights from its data faster than its competition. In 2019, Artificial Intelligence has a lot of thinking to do (and so do you)

Where can you see Jay?

Jay Samit is the author of Disrupt You! and a keynote speaker at Australia’s StartCon 2018.